Baptist Draw: Why you should always do something three times. 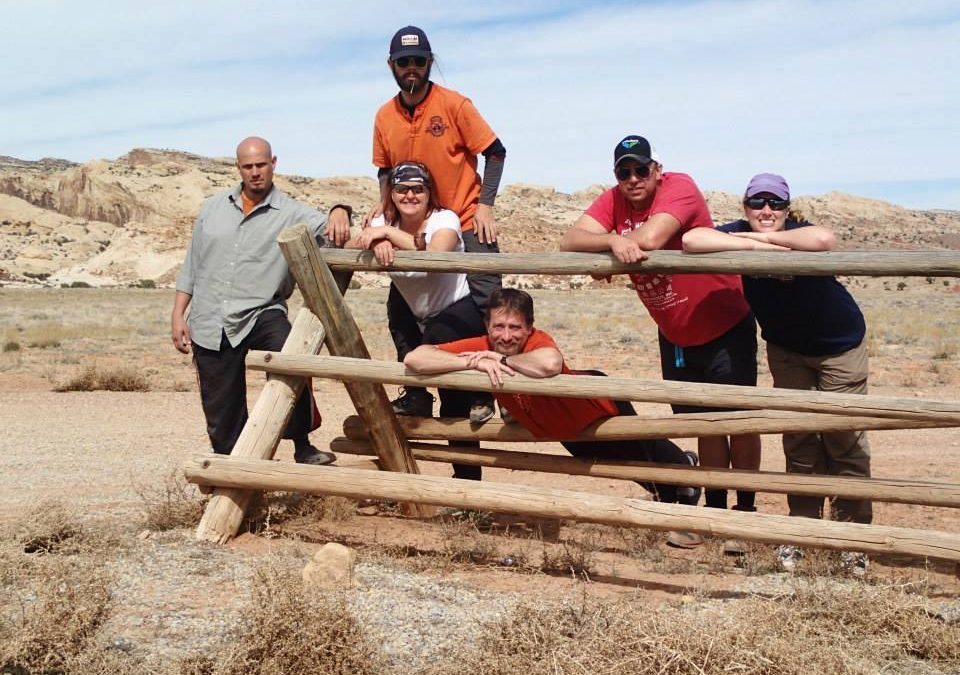 A lot of people will say, “I will try anything once!”.  It’s an unique statement that combines pride and open mindedness into one sentence.  But is one time enough to actually form an opinion about something?  One of my friends would always say,  “I will try anything twice in case the first time is an anomaly”.  This poses another dilemma, what if the first time it’s great and the second time it isn’t?  That is why you should try something three times, just to figure out which one is the anomaly.  I learned this my third time doing Baptist Draw in the San Rafael Swell. 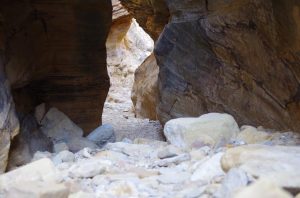 A couple years ago, I met this totally awesome chic named Dawn who runs Bucket List Adventures, an outdoor adventure bucket- list- fulfillment group.  She went on a backpacking trip with me, which turned out to be about as much fun as attending an amateur synchronized swimming contest, (the backpacking trip that is, Dawn was tits).  We became facebook  friends,which in today’s social circles ,means we are legit, and I can borrow money from her. Anyway she wanted to do a pretty basic canyon to shake -off the winter rust, and break -in a first timer.

I told them that Baptist Draw fit that description.  It is close to Salt Lake,  has only one  mandatory rappel  and is  pretty.  Baptist Draw has two  exits  from the canyon–one going down  through Lower Chute Canyon or one  exiting  up the  canyon through Upper Chute.  I have done both of them.  Exiting up   was my first year canyoneering. It had been a long time since then and I had formed a lot more opinions about what I liked in canyons and what I didn’t.  The next year, I exited  going down Chute Canyon.  This time it’s hard to say if I didn’t like the canyon, or if it was the company I was with.  There was only one girl in the group and one guy was trying to mount her the whole time.  He wasn’t with us this time and the only “Dog” we had was Disco. 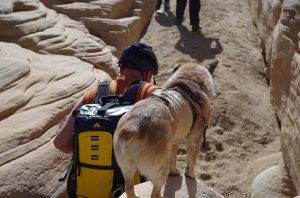 As far as I can  remember, I really didn’t care for either of the exits or the canyon.  However, it was the only canyon that fit the parameters that Dawn gave me.  I was excited to take  Disco  with me and hang out with Dawn, but for the the canyon itself, I would have rather stuck a fork in a power outlet.

After several stops, one of which was to pick up’ Wonder Mutt’, we finally arrived at the campsite and trailhead at about 11:00 pm.  It didn’t take long to set- up camp, kick back a drink or two and then head to bed.

Everyone dragged a little in the morning ,so we didn’t get the earliest start.  My recollection from my previous trips ,in this area, led me to believe that exiting up Chute would be faster.  Considering our late start ,this was what the plan evolved into.

The first trip of the year with Disco can be kind of rough.  He remembers enough about rappelling to know he doesn’t like it, but not enough to remember that he gets over it.  This trip was no exception.  He did manage to do almost all of the down- and up-climbing without assistance and in the narrow section was stemming with his paws on one wall and his back on the other wall.  Once we reached the 80 foot rappel, this would change. 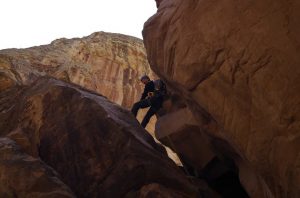 Rappelling with a dog, often requires you to use both of your hands to adjust the dog’s position.  It is unsafe for someone to descend without a fireman’s belay, especially with the extra weight- bunny strapped between your legs.  I had reached the 80 foot rappel and set up the ropes before the next person arrived.  I decided to go first and let the next person bring Disco.

Disco was not okay with this.  He doesn’t like rappelling in the first place and I think he likes it even less when I am not close to him.  When Leann started descending with Disco, the bunny strap got wrapped around the rope.  Neither of them had their full weight on the rope ,so making the adjustment was easy, but required Disco to be in a state of limbo for a minute.  Poor thing was shaking.  It was over in a minute or two and Disco was stoked to run around on his on four feet, completely forgetting about the life or death experience he thought he had.

We headed up canyon which had long stretches of slot that required some turning sideways and up-climbing.  Disco jumped almost all of them and only had to be assisted once or twice.  At one point, we came around the corner and saw a scene that sort of resembled Pride Rock from the Lion King.  Disco and I pretended like we were famous and then moved on. 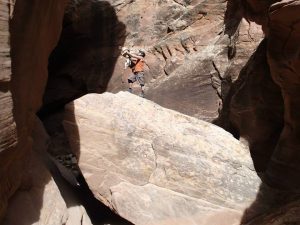 The canyon continued to alternate between a few’ open and narrow’ areas  as we continued.  All in all, it took us an hour and a half from the 80 foot rappel before we got to the exit point.  With that part of the canyon behind me, I had  to acknowledge that my recollection of what the canyon was like, is seriously flawed.  It was a pretty good canyon for beginners and was a lot of fun.  Dawn actually listed it as one of her favorite canyons.

We got back to camp pretty early and  saw the group, that started  before  we did , had returned. They had taken the  Down Chute.   I can only assume that heading down the canyon was about the same amount of time as heading up the canyon.   Distance wise ,it has less obstacles, according to my recollection.  Dawn was as awesome as I remember so it is safe to say that senility only strikes me about 50% of the time.  As for Baptist Draw, it is an alright adventure 2 out of 3 is a big enough sample to figure out if the canyon was worth it.