My First Trip To Gauley Fest 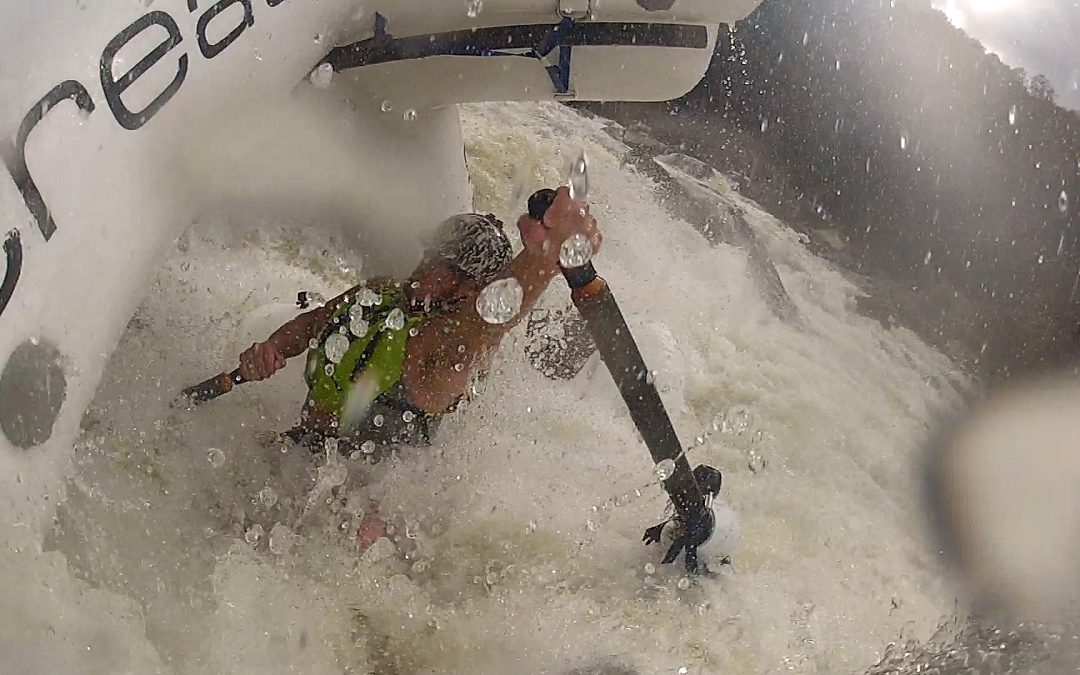 “Welcome to West Virginia” were the first words I heard as I blinked my eyes, easing them into the world of the awake. In the background, the first few bars of John Denver’s, ‘Country Roads,’ played on the radio.“Looks just like Pennsylvania” was the only response I could make in my current state of dysania.

I admired the lyrics of country roads as they fit perfectly with the landscape that was unfolding around me. One red eye flight and one connecting flight had landed me into a foreign world on the other side of the country to do a familiar activity.

The third weekend of September brought about Gauley Fest, the world’s largest white water festival.  I wanted to attend in 2017, but work on a TV series kept me at home. This year I wasn’t going to miss and, also, like people from Texas, California, Georgia,  Colorado and Canada I had made the trip to West Virginia to experience the nature’s original country roads, West Virginia’s white water on the Gauley River.

I had only been working for my company a month when I requested the time off. A lady that sat works with me said she was from that area and asked if she could come along and bring her mother. I knew only the Creature Craft, and Cronin people who were going to be there but more friends is never a bad thing. As it was, her mother picked us up at the airport and arranged a cabin for lodging.

The cabin was small and cozy with two bedrooms and a hot tub. It was located about 15 miles south of the raft launch deep in the heart of West Virginia. The only thing that I could think of was” This is straight out of a teen slasher movie” after lots of reassurances that this was the true spirit of West Virginia and most of the people lived like this, I hunkered down and prepared for the next day’s high water run on the Gauley.

I arrived at the dam about 1030 AM where we began to unroll and prep all of the creatures for the day’s run. There were only a few people at the launch ramp. The river was flowing at about 6k, which is a lot higher than most people are willing to run it. The festival wasn’t supposed to start until Friday, and we were launching a little late. Because of these three things we were guaranteed to have the river to ourselves.

Because of our late start, it was getting close to dark when we loaded the rafts up and began the shuttle back to the dam. The next day would be special. It would be my first run in the creature cow and my initiation into what has become a Gauley fest tradition, jumping on the creature crafts.

Friday was the first major day of Gauley Fest. Usually, the park service opens the dam to let more water out. Thanks to a lot of moisture and rain from tropical storm Florence, the water level was high enough that the park service scaled the release to half of what it was.  There were hundreds of people around preparing to launch. We still had to prep another couple creature crafts in the morning, so once again we got a late start. I was rowing the creature cow today, which was the raft that was cow print. It was the maiden voyage and to celebrate; I wore a cow onesy.

The creature cow was the smallest model. The bigger one that I normally rowed was the second largest.  It was night and day when it came to rowing the creatures. The smaller cow was significantly faster and easier to maneuver, yet it didn’t have the stability and flipped easier.  Something I found out when I approached pillow rock.

Due to our late start, there were only a few people on pillow rock. I bumped the first big pillow and turned over.  I floated sideways past the next pillow. I wondered why nobody tried jumping on the creature; it wasn’t until later I saw the video, which turned out to be an epic laugh.  The person who tried jumping on the cow slipped and fell into the river…in epic fail blog fashion.

By the time we approached Sweets Falls, more people were waiting.  As I approached, I heard a low buzzing hum. The closer I got, the more clear it became.  People on both sides of the river were going “Moooooo” something that would have made me laugh if I hadn’t been so concerned with missing the hole that kept the other creature held for 25 minutes.

Once we reached the take out, it took us about another hour to stack all the creatures and get them ready for the next day’s run.  We climbed in the shuttle vehicle just as suns rays started hitting the earth at more of an angle, and the beginning of dusk. The radio kicked on, and it was John Denver, ‘Country Roads.’ An off tune chorus sung by stinky sweaty rafters began singing ‘Country Roads’ accompanied our journey back to the cabin.

Saturday marked the second official day of Gauley Fest, and the last day I would be running the river.  We got an earlier launch on this day and had a total of 13 creatures running the river at the same time.  The crew got spread out, and there were gaps between the various groups of creatures. The group caught up with each other just before pillow rock.  When the creatures came around the corner people on both sides of the river started cheering. Unlike the day before when there were only a couple people on the rocks, today there were hundreds, and from the bend in the river, you could see them lining up, picking the boat they were going to jump on.

As I entered the top of the wave train, my inexperience in the smaller craft caused me to tip early.  I righted mysellf just before the first rock, which I hit and which tipped me again. At this point, an individual jumped over the raft. I floated down the river past the second major rock in which three people jumped on the raft, and coincidentally turned me right side up. Looking back at it, I am glad I tipped early and think it is a good strategy if I return to Gauley next year.  Numerous people have been hurt by the jumpers and being on your side shields you from the carnage.

As soon as the last creature craft came past pillow rock, everyone jumped off the rocks, grabbed their rafts and continued down river. It’s almost like jumping on the creatures is a tradition people don’t want to miss.

Rafts piled up once again at Sweets Falls.  Feeling more comfortable with the run and the window, I needed to hit; I paid more attention this time as I approached the falls.  The sweet sound of Moo was there, but a new sound was present, the ting ting ting of a cowbell could be heard. It wasn’t one cowbell but a couple of cow bells. It was almost unbelievable.  The only thing this run was missing was Christopher Walken screaming ‘more cowbell.’

After exiting the rapid, I bumped up against another rock that had people on it, and sure enough, another person jumped on the Moo Machine…for a total of five on one run.  I would have liked to stick around and join the party but before the run, Darren the owner of Creature Craft, let me know he wanted to display the Moo Machine at the Creature Craft booth at the festival that night, so we had to get it to the boat ramp asap.

After loading the boat up, I rode back to the dam before the rest of the people were off the river. I had to wait for an hour or two until everyone else showed up.  After joining up with the rest, we decided to go back to the cabin and then head to the festival.The festival took place at the high school community ball field.  They had booths set up with numerous vendors for kayak companies I have never heard of as well as the big popular ones like Jackson. The festival came complete with food stands, and even live music.  As I walked around the area, I felt kind of sad that I got there too early and left a little early. I should have flown out Wednesday night, arrived early in the morning Thursday and then drove to the dam in time to run the river,  then flew out Sunday night.

We left the cabin early on Sunday to head back to the Pittsburgh airport.  En route to the airport, we got a notice that our flight would be delayed. Even after stopping at a restaurant on the way to the airport we still arrived with two hours to spare. Making myself as comfortable as possible, I started flipping through the music on my phone. Nothing seemed to stand out. I needed some mood music. With a fond thought, I searched you tube for John Denver.