Why We Shouldn’t Drain Lake Powell 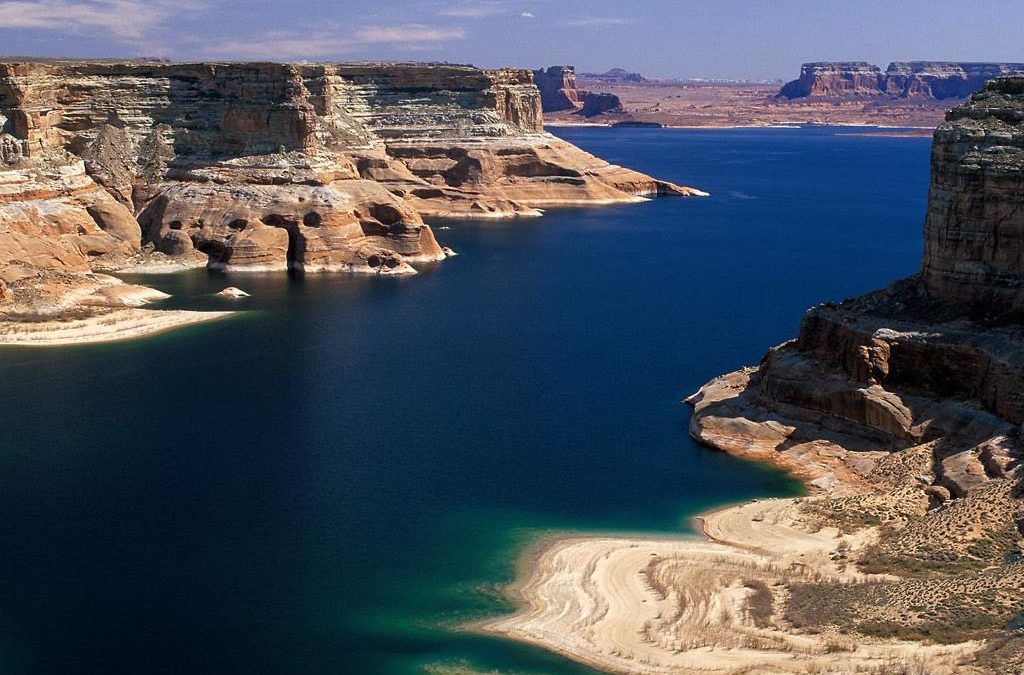 I was in 5th grade when I first heard about the controversy surrounding the Glen Canyon Dam and Lake Powell.  My teacher was an old scraggly man who appearance-wise reminded me of Mr. Burns from the Simpsons.

He mentioned how people complained about building the Glen Canyon Dam and hiding so many spectacular ruins and natural features- he also mentioned the other side of the argument.  That nobody went to that area until there was a lake there.  The beauty that wasn’t covered by water was experienced by far more people than the beauty that was hidden by the water.

Many people assume that I am a big conservationist and a major tree hugger, and who is one paycheck away from buying a smart car, and dreams of dancing with tree spirits.  Even though I appreciate the outdoors, I think most conservationists get carried away.

The part of the Colorado River that was blocked and flooded, when they built the dam is one of the most remote areas in the continental US. To experience the oasis-like areas, that would be uncovered by draining Lake Powell, would require major effort and survival-like skills. The flooded area is a maze of small canyons, in which the everyday person is likely to get lost.  The only people who would see these wonders are the hardcore, outdoorsy people who don’t mind backpacking for several days.  I would be one of the people who benefit the most from the deconstruction of the dam.  However,  the majority of the people wouldn’t be able to experience the newly-uncovered treasures.

The Glen Canyon National Recreation Area is on public land and should be to the benefit of all.  Currently, almost 3 million people visit the Glen Canyon Area every year.  Most of these are boaters and water recreationists.  Once you eliminate the dam, you eliminate a good portion of those visitors.  If this is public land, what justification is there for eliminating the recreational opportunities of the many because of the desires of the few.


What impact will draining Lake Powell have on several of the smaller surrounding communities?

I am convinced that the only reason Hanksville exists is because of traffic heading to Lake Powell.  There are other small communities spread around the southern part of the state which flourishes because of the Glen Canyon National Recreation Area.  It doesn’t make sense to take away the livelihood of these communities just so a few people like me can experience all of the hidden gems.  Hanksville gets the majority of its business from the nearby state and national parks.  However, some impact will be felt, but communities farther south will be devastated.

A more significant impact would be felt someplace like Page, Arizona.  Page, Arizona, was founded in the ’50s to help facilitate traffic and create roads for construction of the dam.  Today it is a community of almost 8,000.  These are in support roles for the people 6 million people who visit the Grand Canyon every year and the 4 million people that visit Glen Canyon.  Take away 40% of those visitors, and a good portion of Page businesses collapse.  The Marina’s collapse, such as Bullfrog, and Hite will also collapse.

Hite Marina probably serves as the best example of what is expected if Lake Powell is drained.  Hite used to be a thriving hub of boat launches and commerce, with hundreds of busy residents running around catering to visitors.  As lower and unpredictable water levels have plagued Lake Powell, people have preferred launching farther south from Wahweap and Bullfrog.  Today there are a couple people who operate a gas station.  The ranger station is always vacant and once-thriving Hite, unsuitable for launching, and has become a ghost town, not unlike the one that was covered when the lake was formed.


This may be news to most people, but the Southwestern United States is a desert environment and is experiencing drought conditions.  If you think the water needs are bad now, wait until we stop storing water.  That big lake that hosts Meetup houseboat orgies every year also provides power and water.  Most of the water flows to places like Arizona, Nevada, and California. If they don’t get the water from Lake Powell, they will get it from somewhere else, and most likely, the other states in the area are going to have to give up some of theirs. People need water and eliminating a water storage facility is pretty short-sighted.

Lake Powell holds a whopping 27 million acre-feet of water.  That is more than 4 trillion gallons of water.  After the completion of the dam, it took 16 years to fill.  That is a lot of water to let flow down the river.  A total of seven states benefit from the Glen Canyon Dam Utah, Colorado, New Mexico, Wyoming, California, Arizona, and Nevada.  The former four are obligated to provide 7,500,000,000 acre-feet of water to the latter three every year.  Overall, it provides drinking water for more than 40 million people. Losing water that took 16 years to collect is a mistake that would take 16 years to reverse, and the problem is the need will increase during that time.  This would not be something we could ever recover from.


Cleaning Up The Dry Lake Bottom Would Be Expensive


Glen Canyon Dam was completed in 1966. For the past 50 years, the dam has held back the waters of Lake Powell, a major recreation destination for 3 million people per year.  For the past 50 years, every piece of trash, sewage, garbage, and dead-hooker that has been thrown into the Green River or Colorado river, now sit at the bottom of Lake Powell. That doesn’t even take into consideration sunk boats and lost camping gear.  Who is going to be responsible for the cleanup, and who is going to pay for it?  The area would take a couple of decades to clean up, and it would never reach its original beauty.

The National Park Service and Aramark have a volunteer program that patrols the beaches and coastlines of  Lake Powell, to clean up trash.  Every year they collect approximately 50,000 pounds of trash.  This is a yearly basis and only the stuff that is on the shore. What lies beneath the surface of the lake is occasionally cleaned up by divers, but they can’t get the deepest parts, or not even close to all of it.  The amount of trash in remote areas that lie beneath the water could easily be 50 times what they collect yearly.   The beauty people think they will see, is going to be more like the local waste depot, than the crystalline pools of Havasupai or walls of the Grand Canyon.  The trash isn’t even the biggest problem we have to consider.

During the World War Two Era and Post World War Two, uranium mining was the biggest fad in the deserts of Utah.  The San Rafael Swell is littered with old mining cabins, and astute rafters can see Uranium shafts drilled into canyon walls on trips down the Green and Colorado rivers.  The land currently buried below Lake Powell and tons of silt and sediment is no exception.  Thanks to the Vanadium Corporations White Canyon mill, 26,000 tons of glow powder lay at the bottom of Lake Powell waiting for its time to turn middle age backpackers into the latest rave decoration.

Phil Goble, The Uranium Mill and Radioactive Materials Section Manager for the Utah Department of Environmental Quality, has this to say.

For the people enjoying Lake Powell, they’re not exposed to anything that’s going to hurt them, The uranium mill tailings produce a sandy waste that contains heavy metals and radium, which is radioactive, but these tailings have been down there since around the 1950s, with several feet of sediment placed over top of them and the water used as a moderator, or a shield. What we have said repeatedly about the uranium mine and mills is that it is not worth the risk to our drinking water. … if radioactive elements like uranium or radium get into the lining of a human’s lungs: anemia, fractured teeth, cataracts, and cancer.

I will get to see some hardcore shit that hasn’t been seen for 50 years.
Free Admission to Rave Parties
If the question is about building the dam, it might be another story. But the dam has already been built.  However, despite what all the Nissan Leaf and Prius owners believe, getting rid of the dam isn’t going to change a damn thing. 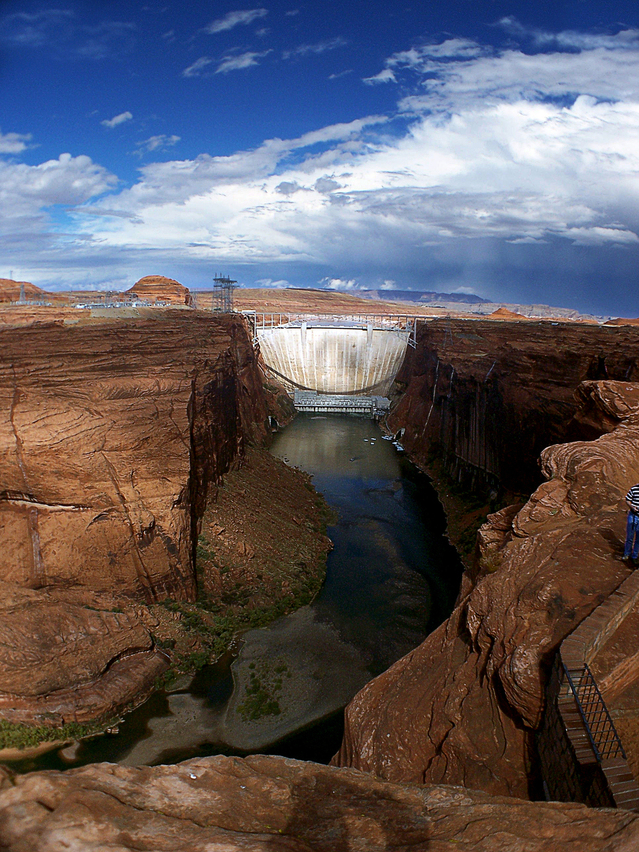