Located almost directly in the heart of Utah is the San Rafael swell. During the mid 20th century the area was home to uranium and mineral developers. Some were large companies, and others were single men. Today there isn’t much in the swell besides the occasional adventurer and rusty tool from the past. A rusty cable from the uranium days is what gives Cable Canyon its name. 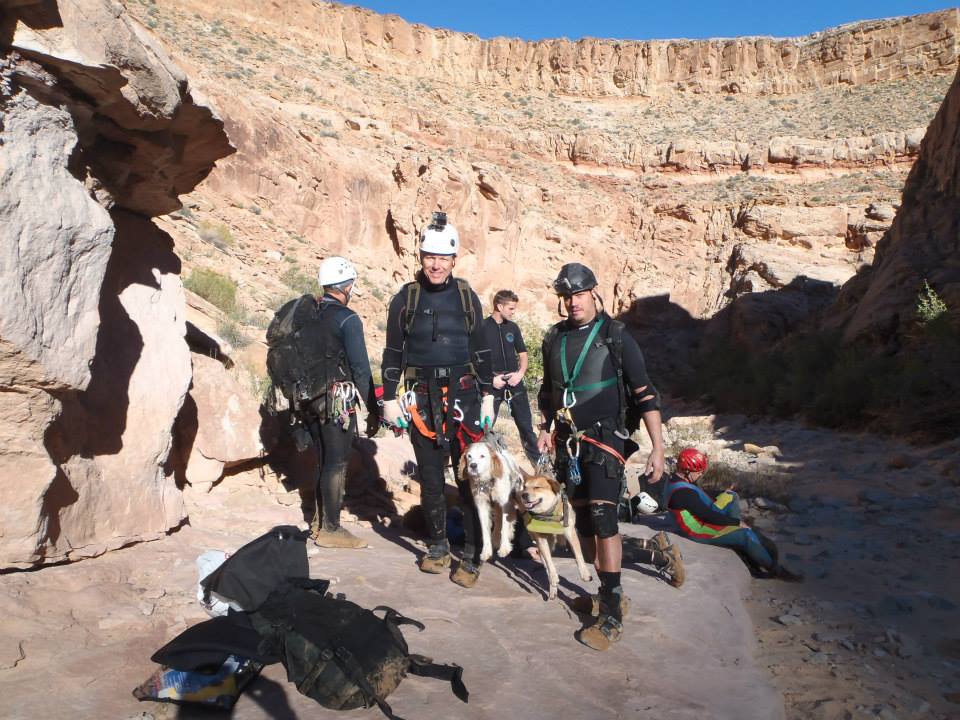 The first time I did Cable was in 2014. I had been canyoneering for several years before my trip here, but I was never a fan of the San Rafael canyons. It was the canyon that made me appreciate the San Rafael Swell.  I didn’t care for the canyons in the Swell before this one, but this canyon is special.

The first time we did the canyon we had 11 or 12 people and two dogs.  Most of the people were fairly experienced and had lots of outdoor experience.  Several of them had pothole experience and well the dogs; they had experience too.  The potholes were simple partner assists out. Nothing was more than 7ft high, and we finished in about 8ish hours. No matter what someone was always cracking a pothole, setting up a rope or working on the next obstacle.

RELATED ARTICLES:   Cable Canyon isn’t the only trip I did 2.5 times.  Read about Hiking Timp!

The So Called Second Time I Was “Near” Cable Canyon

The second time, on the approach, the trip leader, me, tripped. I landed on my face, and my knee hit a rock.  The rock punctured the plastic shank in my knee pad and punched a hole all the way to my knee cap. You could see the knee cap when you pulled the skin apart. Did you read the part about lots of nasty water up above? Because I have no desire to get some new disease which may lead to leg amputation, we turned around and headed back to camp.

Third Time In Cable Canyon Was a Charm

The third time was great.   This time it was a completely different experience. There were Kat, Cal, Jennifer and Me. Kat had done several canyons before, and Cal had done a few.  Cal is fit, and an experienced rock climber. Jennifer had done one canyon before, Keyhole. Comparing Keyhole and Cable is like comparing a peck on your check from grandma and a game of tonsil hockey with the head cheerleader. It’s safe to say Jennifer didn’t have much of a clue.

Things were going well in Cable Canyon.  We enjoyed the hike through the greyish sandstone walls.  They closed down a little and then opened up again constantly teasing the next obstacle. It continued like this for an hour with several downclimbs and an occasional rap.  The first major obstacle was in the first pothole section. 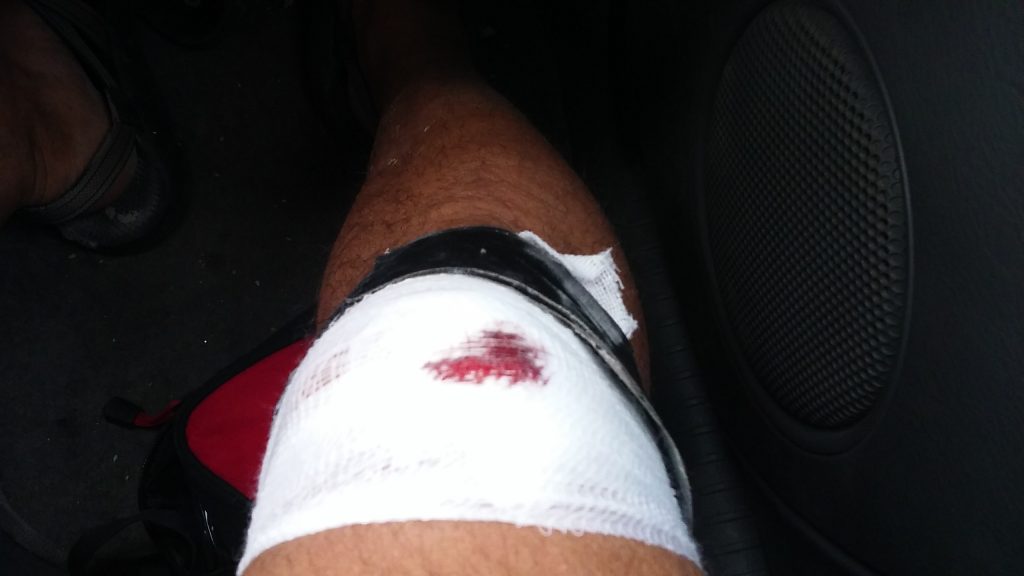 The first time we were here, the pothole was an easy knee assist-out. I remembered that the right side of the pothole had dirt built up so it would be easy to stand if a pack toss was needed. This was still the case. I also remembered that you could walk right next to the lip, bend your knee and let someone step on it and climb out. This was not the case.

The dirt sloped sharply from the middle to the edge. Add to the fact that a good portion of the middle and side had also washed out and it was a good three feet lower. A simple knee boost would not work this time. Kat had to climb up on my shoulders, put one foot on my head before she was able to get enough leverage to get out. From there it was possible to set up an etrier.

RELATED ARTICLES:   You have to try something three times, not just once.  Baptist draw an acquired taste! 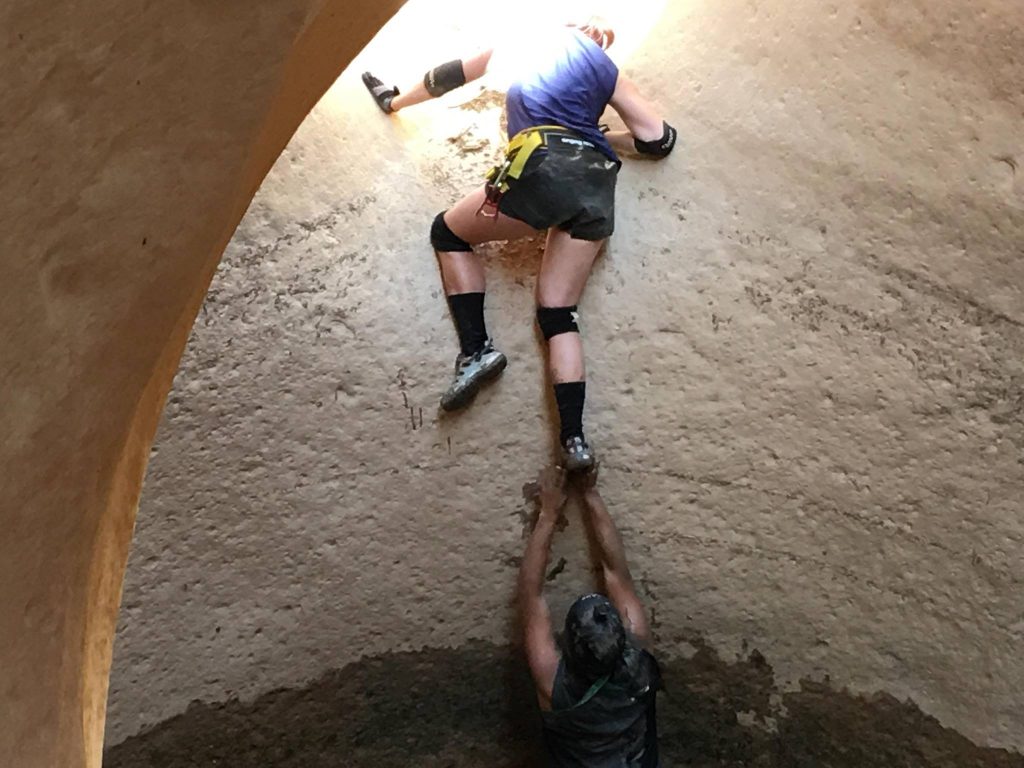 Everything was pretty straightforward and relaxed until we got to the second section.  It was easy climbing and nothing difficult. Even the potholes were easy. However, lack of people traveling through the canyon, lack of water creating a stench pit of black water, and twelve inches of pine cones.  It’s safe to say I was the only one that was amused. Kat and Cal weren’t happy with me, and Jennifer was about to cry. Good times!

The final surprise was at the bottom of the big rap.  The first time I did the canyon, it was a simple beached-whale maneuver to get out of the pothole at the bottom.  This time it required a full on two person partner assist in getting one person out. Jennifer was a champ as Cal, and I hoisted her to the top of the saddle and had her rap down the other side.

I had a great time the third time I did Cable Canyon, all though it took almost 11 hours.  It was much better than the second time, which only took about 2. The first time there were more people, which created a different social factor. The third time, the obstacles were more exciting. The others may disagree, but hey a little dirty water only hurts if it leads to amputation or death.