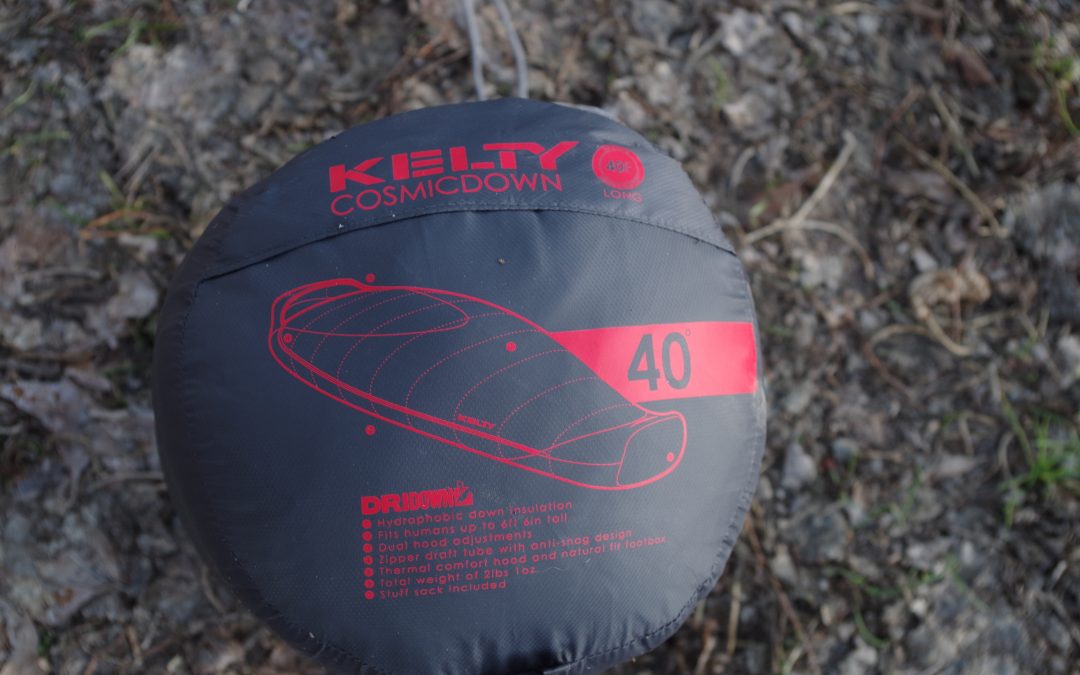 Once upon a time, I had a mountain hardware phantom.  I do not know what happened to it, but it was by far the best sleeping bag I have ever owned.  Then I purchased a Lafuma Warm-n-Lite. It was a 40-degree bag that was lightweight, compressible, and kept me warm on 30 degree nights. When my ex-wife moved out, it mysteriously disappeared along with my five-year-olds wetsuit and favorite stuffed dog, Coco. I bought another down sleeping bag from Outdoor Vitals. That sleeping bag suffered a tragic accident involving a velociraptor mix, and my two-person Mountain Hardwear Lamina was in my Jeep when it was stolen.  All these things combined left me with two weeks to go until the Boatsmith Whitewater festival, and I didn’ have a sleeping bag. I decided to take a risk and try to get a Lafumaesque style sleeping bag. I was looking for something that I could use for high alpine backpacking compressible, lightweight, and around 40 degrees. I came across a Kelty Cosmic Down 40. I have seen the brand around and know people who love it. I have never sold their products or owned one. I shrugged and said, “why not?” 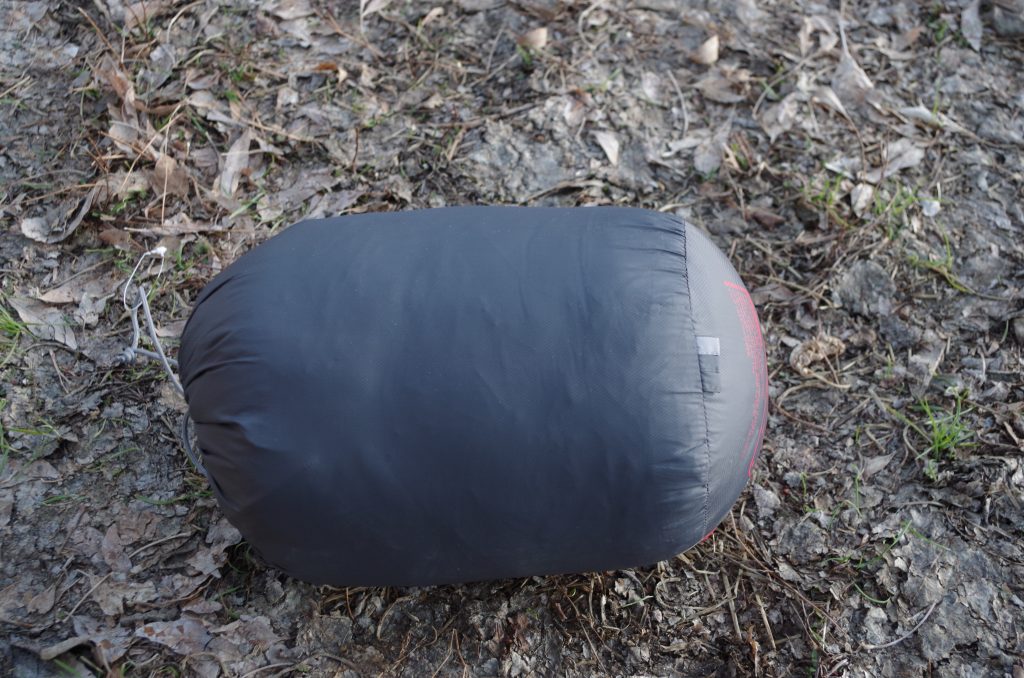 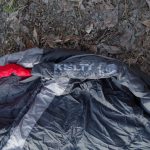 A Look At The Draft Collar

What Does Kelty Say About the Cosmic Down 40?

Kelty referred to the Cosmic Down 40 as a three-season superstar and a “legit UNICORN-with “pony pricing.”  They claimed that it had a soft butter-like Nylon shell, with a draft collar meant to keep the cold out and the heat inside the bag.

The Kelty Cosmic Down 40, Dimensions, and Statistics. 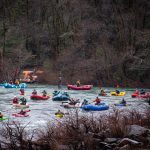 The Boatsmith River Festival takes place every year over the Presidents Day Weekend on the Smith River near Gasquet, California. The proceeds of which go to benefit the STEM-based Gasquet Mountain School. As one of the newer, if not the spring chicken of paddling festivals, Boatsmith is still picking up traction and for big water boaters, it’s river flows make it unpredictable, but the environment, people and purpose make it a must-attend for whitewater lovers of all crafts and abilities. Read More!

My Experience With the Kelty Cosmic Down

First night.  The temperature on the first night reached a low of 38 degrees.  Partway through the night, I was forced to put on a second layer of clothes.  I was still cold and would have to continually turn so the coldest part would be pressed against the Big Agnes mat I was using.

By the time the sun had pierced the canopy of trees, I was entirely inside the sleeping bag and shivering.  I opened my eyes while I was still encapsulated inside the Cosmic Down, and I could see the light coming in like a zebra pattern for an inch each side of the thread where the sleeping bag had been sewn.  I moved my hand down the inside the sleeping bag. Every place light was coming through; there was a draft. It reminded me of a door with a gap between the door and the frame.

The Second Night, the temperature was supposed to be 5 degrees warmer, and the bag was rated to a 40-degree temperature rating.  I headed to bed a little early on this night at about 9 pm.  I was hoping I could warm the bag up before the temperature started to drop.

Sometime in the middle of the night, I found myself putting another layer of clothes on and rotating my body on intervals to place the coldest side against the sleeping pad. I made it through the night with shivers and had difficulties determining the difference in temperatures between the first night and the second night.  It was still cold. I checked the weather, and the cold for the night only reached 43, which was above the sleeping bags temperature rating.

In preparations for the third night, we drove 20 miles into Crescent City.  I wanted to try an experiment. We found a Walmart, and I found an Ozark Trail 40 degree sleeping bag for 29.99. About a fifth of what I paid for the Cosmic Down bag.  It wasn’t as compressible as the Cosmic Down, and It was bigger by about 1 inch in width and 2 inches in length when fully compressed. This night was supposed to be similar to the first night just below the forty degrees.

As night fell, I climbed into the Kelty sleeping bag, and about midnight I woke up because of the cold.  At this point, I unrolled the Walmart sleeping bag and put the Kelty bag inside of it. I went back to sleep and woke up in the morning after experiencing the best night of sleep in three days.

The fourth night was supposed to bring just under 40-degree temperatures.  I decided not to use the Kelty but to start in the Wal-mart sleeping bag. I didn’t wake up in the middle of the night being cold.  It was the only night of the four that I slept straight through the night and did not have to adjust my sleeping arrangements, add more clothes or more blankets.

My overall recommendation will be to skip the Cosmic Down 40 in favor of something more expensive if compressibility, weight, and longevity is an issue.  If not, there is always Walmart. 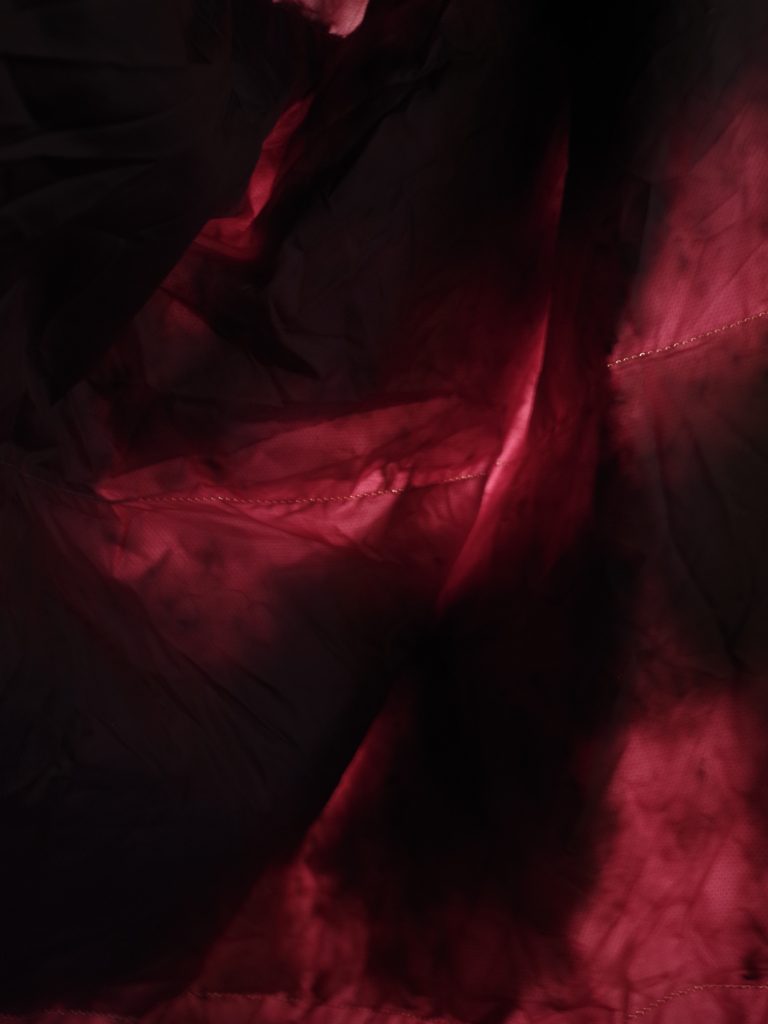 I hung the bag up in a dark room and put light behind it. Where the light sections are, is where insulation should be to stop prevent heat loss.

What the Kelty Cosmic Down 40 would be perfect for?

This sleeping bag should not reflect on Kelty as a company.  However, this is a bag that only has two redeeming features. It is relatively compressible, and the draft collar for the zipper was one of the better ones I have seen.  It would be great for backpacking, but I wouldn’t use it anywhere the temperature is expected to drop below 55 or 60. The 40-degree rating isn’t to comfort, and I don’t think it is to survival either.  The 40-degree rating is more like wishful thinking that encourages one to buy a lottery ticket.

Not a 40-degree sleeping bag

You can feel the air coming in through the bag 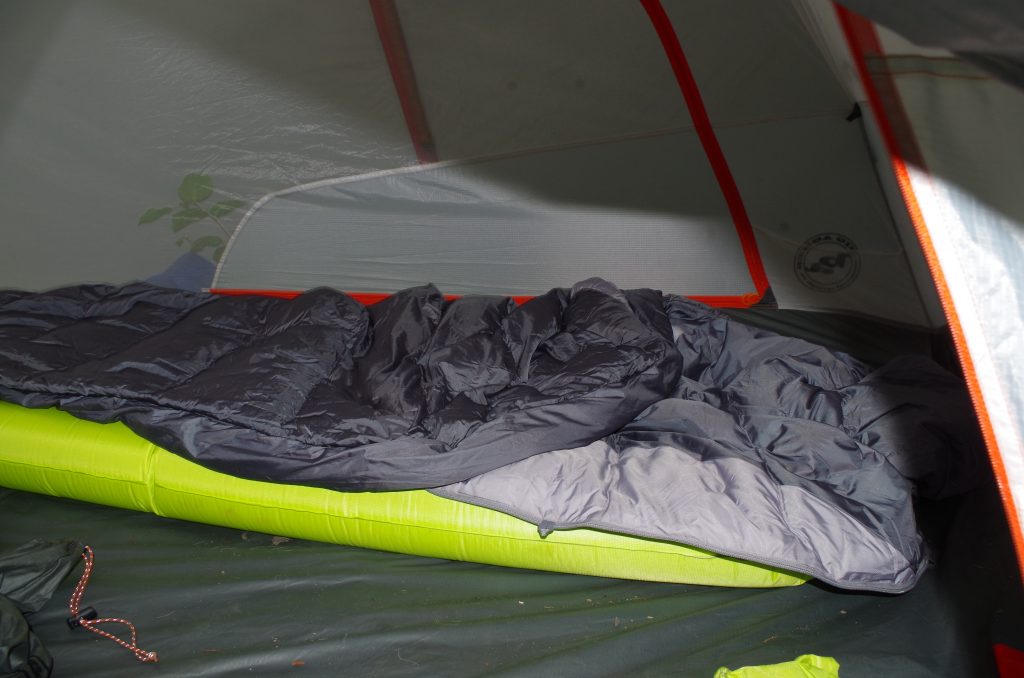 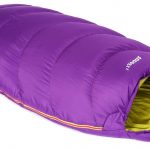 The first thing I learned, as a scout, is how to be as annoying as possible in the outdoors. This is something that I outgrew, as I become older. The second thing that I learned was that sleeping bags don’t really keep you warm at the temperature as advertised. Flash forward 20 years. I was a sales person at an outdoor recreation store. When it came to sleeping bags…Read More!